Tankless water heaters are the latest trend. You can get rid of those age-old massive water heating systems that take up a ton of room. Think about all the things you can do with the extra space that comes with tankless! Before you hit the stores, take a minute and ask yourself: do you need a condensing vs non condensing tankless water heater?

Not sure about the difference? This guide will provide the information you need on condensing vs non-condensing tankless water heaters. Then, you can decide which one’s best for your home or rental property.

First, what Is a Tankless Water Heater?

As the name suggests, tankless water heaters lack the traditional storage tanks that come with tank-based models where the heated water is stored. They have gained massive popularity over their tank-based counterparts, which are both cumbersome and inefficient.

How Do They Work?

In tankless systems, the cold water passes through the water heater and is heated up on the run using a heat exchanger.

The heat exchanger warms the running cold water using combustion, and it keeps gaining heat as it passes through stainless steel pipes inside the heater.

Compared to traditional tank-based, these heaters are quite cost-effective. Instead of heating tons of water every time — half of which you will not use anytime soon — these models only heat the required amount of water at the moment, which helps you save a decent amount on energy bills.

As discussed, there are two different types. Additionally, it is important to know the difference between a condensing vs non condensing tankless water heater. Heating water produces steam as a by-product of combustion. The primary difference is based on how the heaters deal with steam, which has the potential to condense and corrode home appliances.

What Is a Condensing Tankless Water Heater? 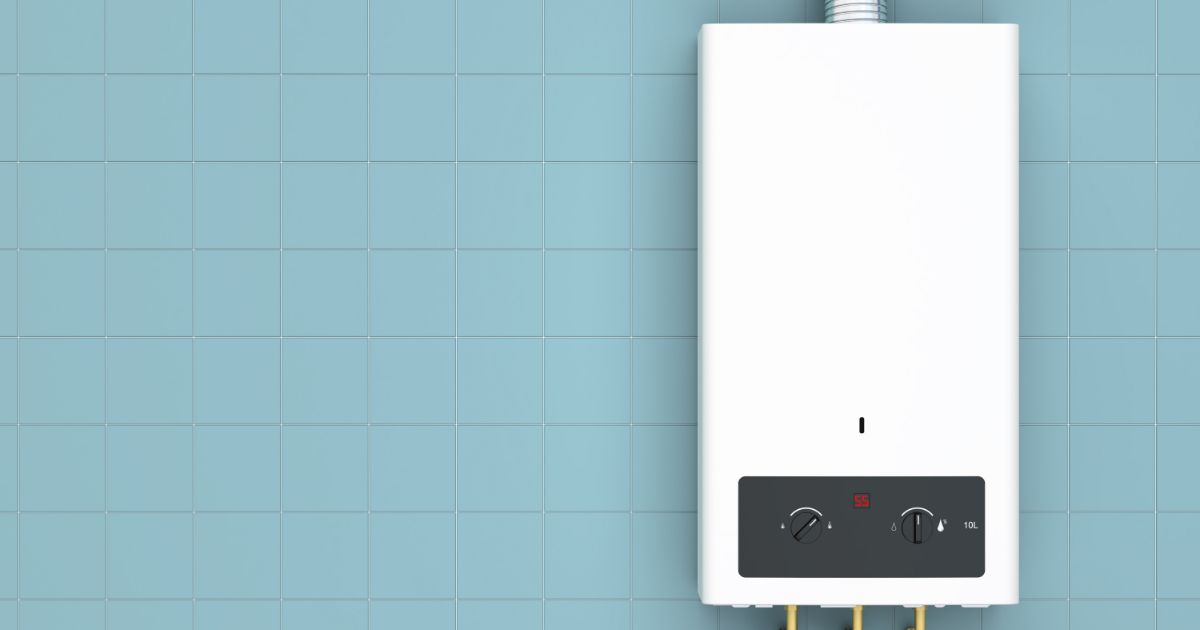 A condensing tankless water heater is a completely closed system that recycles vapor to keep heating water and vents it only when water is no longer being heated up inside. The corrosive nature of the vapor and the heat are usually handled effectively by a pipe made of PVC.

Due to repeated usage and recycling, the vapor generated in this closed system is substantially cooler and does not require elaborate and expensive venting systems.

How Does It Work?

It is designed in a manner that allows the exhaust to be looped back into the system before it can be vented out. The gasses in the condensing system are not that hot, especially when compared to their temperature in a non-condensing system.

The system cools the gasses inside it and collects the water generated through condensation inside it as well. Since the condensate is acidic and can be hazardous, it is neutralized inside the system before being drained out of it.

What Is a Non-Condensing Tankless Water Heater?

How Does It Work?

And again, unlike condensing tankless water heaters, these heaters do not loop the gas back into the heater — instead, it’s vented out directly. Subsequently, the temperatures of the steam can get searingly hot, sometimes even crossing 300 degrees Fahrenheit.

Condensing or Non Condensing Tankless Water Heaters: Which One Should You Choose?

So, which one should you choose to install in case you need a water heater? Well, there are a few things you might want to consider before making that choice. Let’s take a look:

As such, both are considered eco-friendly options for water heaters. However, condensing water heaters have the lowest carbon footprint compared to almost any other water heater type available on the market.

If you’re very particular about the carbon footprint of your appliances, the condensing tankless water heater should be your go-to.

The steam recycling mechanism of condensing tankless water heaters makes them a better choice in terms of saving money. Since the by-product of the combustion is recycled and is used continually to heat the water, it requires far less energy, which subsequently gets you a little rebate on your energy bills.

Also, the condensate can be channeled back into your water pipes depending on how the connection is built, helping you save on water bills as well.

The lifespan of either condensing vs non condensing tankless water heater types depends on the build quality as well as the maintenance of the units. Both types have internal components that are liable to damage and wear and tear over the course of their lifespan.

For example, non-condensing tankless water heaters have searing hot steam passing across their exhaust pipelines as well as ventilation systems. This has the potential to cause leaks and weaken the materials over time.

On the other hand, the condensing pipes inside condensing tankless water heaters repeatedly handle corrosive emissions throughout usage. They must be constructed with sturdy and corrosion-resistant materials that are high-grade.

Simply put, non-condensing tankless water heaters are cheaper and cost significantly less upfront to purchase and install. On the other hand, the extra heat exchangers and complex steam looping system of a condensing type of unit make it a more expensive option, both to purchase and maintain.

In general, water heaters without a tank are significantly more efficient than electric models. So, if you’re upgrading from one, both variants will have much higher efficiency levels.

That said, there’s a small difference between the models. While non-condensing tankless water heaters are considered 80% efficient, condensing types boast 90% efficiency. In pure usage terms, you can’t go wrong with either type.

How to Select the Size of a Tankless Water Heater

One of the main drawbacks of a tankless water heater is that it heats water on the go without heating the entire water reservoir. While this is usually enough for a personal shower, it can get tricky when the entire family is lining up.

Knowing the capacity requirement of your family is a great way to ensure everyone gets their quota of hot water without having to wait for it.

Of course, determining how much hot water a family needs means taking into account several variables. If you standardize the temperature of the water and gallons-per-minute measurement of your water requirement, you can arrive at indicative numbers.

Choosing between a condensing vs non condensing tankless water heater depends on several factors. In this article, we have given you an extensive list of all the factors that differentiate the two units. All you have to do is align your requirements with these factors, and you will find your new water heater match.

Tankless water heaters – What to look for

Save On These Products

Waterheaterreviewssite.com is your one-stop shop for up-to-date information, advice and the best hot water heater products.

*Disclosure: Links in the posts above are “affiliate links”. This means if you click on the link and purchase the item, we will receive an affiliate commission. We are disclosing this in accordance with the Federal Trade Commission’s 16 CFR, Part 255: “Guides Concerning the Use of Endorsements and Testimonials in Advertising. All Right Reserved.